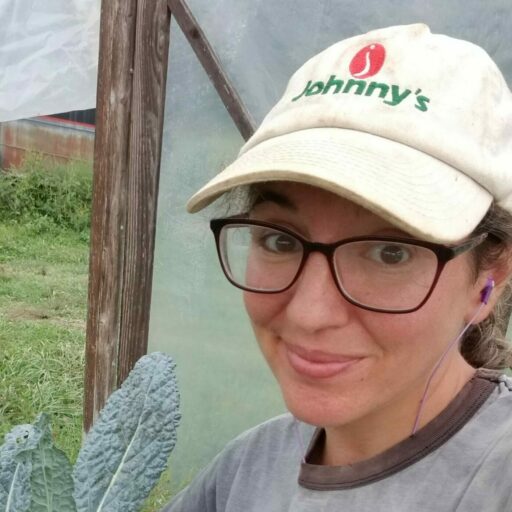 A resilient system helps this Pennsylvania farm weather the tough years, but with tougher years in forecast, more support is needed.

Last week Pasa staff had the honor to visit Thistle Creek Farms in Huntingdon County, Pennsylvania to talk with farmer George Lake–a grassfed beef farmer with nearly 30 years experience. George described how prioritizing ecological health on his farm often means less need to invest in damage control. However he also shared how the changing climate has made for some tough years recently.

Touring the pastures, we got to see firsthand how the benefits of practices like rotational grazing and integrated pest management cascade to increase the health, productivity, and resilience of the whole farm system. George is meticulous about the number of days he grazes each field, based on the vegetation, acreage, and herd size. His six-year-old granddaughter often helps move the fence lines, and George relies on a beloved trio of sheep dogs to move his herds into new paddocks. “Who else would be delighted to get out there and move cattle on a freezing Christmas morning?”

His systems were developed to minimize the use of fuel and equipment, avoid chemical fertilizers and insecticides altogether, and enhance the complicated relationship between sun, soil, grass, and animal. In recent years however, increasingly extreme weather is taking its toll.

In 2018, Thistle Creek, like many farms in the region, experienced record rainfall. Water infiltration tests of the farm’s perennial pastures indicate their soil can absorb up to 12 inches a day, unlike neighboring lands, whose bare soil washed onto their property. But sustained heavy rains made for a lot of mud.

“It was a tough year,” George said.

“What really killed us though,” he said, “was no sunlight. We really are farming sunlight.” Fewer sunny days reduced photosynthesis in the grazing forage, which reduced the sugar levels in the pastures and, in turn, the milk for nursing calves. “It was like the moms had fed them skim milk.”

Many of the farm’s sustainable practices carried them through that tough year. A visiting entomologist explained to George how refusing to spray hay fields with insecticides had likely spared them from a serious leafhopper infestation, which turned many neighboring alfalfa fields yellow in 2018.

“We were standing out behind the barn, and he said, ‘You have a lot of lightning bugs, don’t you?’ And I said by the hundreds and thousands! My wife and I come out here at night to watch them… And he said, ‘They eat alfalfa leafhopper.'”

George believes that avoiding chemical inputs has helped increase in beneficial bugs in their soil as well. He told us:

“When we started farming, I couldn’t find any worms for fishing. That’s just how degraded our soils were from extensive chemical fertilizer application. Over the years, with a focus on soil health—the land is now teeming with wigglers.”

So far 2022 is shaping up to be a different kind of tough year, much more dry than 2018, though nearly just as hot. The temperature during our visit was well into the 90s, and the global temperature in June of this year was the sixth hottest on record. Across Pennsylvania, many counties are drier than normal or experiencing moderate drought. A focus on soil health, on farms like Thistle Creek, can help them get through a tough dry year too. But as the tough years begin to stack up, farms of all types will need increased support and resources to weather the change and continue to feed their communities.

At a moment like this, with tougher years in the forecast, it’s so vital that George was willing to share his story with us. Part of what I love about Pasa is that this organization understands the value of gathering farmers and community members together to share our hardships, our triumphs, our wisdom, and the deep joy we get out of being stewards of this earth.

I left Thistle Creek feeling reaffirmed in my knowledge that farms like George’s are both better prepared to withstand the upheaval of a changing climate and more equipped to reverse some of its most damaging effects. Widespread adoption of these practices is no small lift, though, and will require more support from government agencies, research institutions, and the farming community at large. With the Farm Bill reauthorization on the docket for next year, we have an unprecedented opportunity to do just that.

About the author: Lindsey Shapiro is our new Farm Bill Campaign Organizer. Her time in this role will be spent meeting with farmers, working to amplify their voices, and advocating for policies that support regenerative practices.

Do you have a story to tell about climate change on your farm or in your community? Or thoughts about how the Farm Bill can help? Email Lindsey.

Why you should care about the Farm Bill

Farming in a time of war