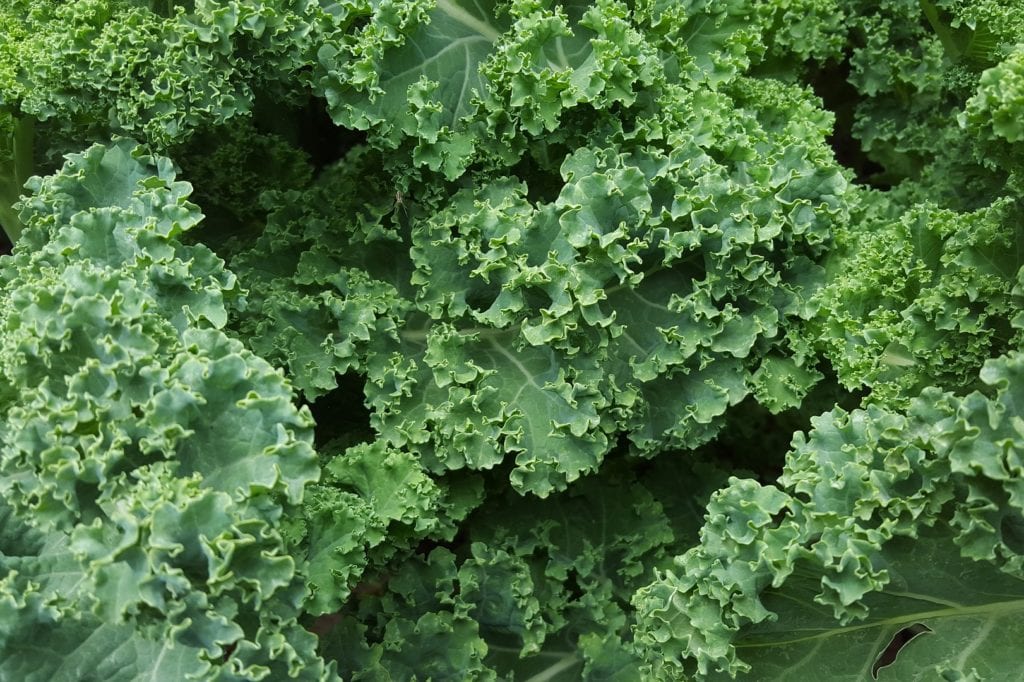 This is the third installment of a blog series on soil health challenges and innovations revealed through three case studies that are part of our ongoing Soil Health Benchmark Study, a citizen-science project we began in Pennsylvania in 2016. Read previous installments: “Too Much of a Good Thing: Compost Brings Phosphorus Challenges to Red Earth Farm” and “Stuck in a Rut: Stagnant Organic Matter Levels at Bending Bridge Farm.”

When Jennifer Montgomery and Greg Boulos started Blackberry Meadows Farm—an organic fruit and vegetable CSA located outside of Pittsburgh—they asked potential customers what they found most valuable about buying locally grown, organic produce. They learned their customer base believed that the produce grown at local, organic farms was more nutritious than what’s typically found at grocery stores. While Jennifer and Greg suspected their customers might be right, they were determined to justify the notion with data.

Since they started Blackberry Meadows in 2009, Jennifer and Greg have been regularly examining their produce using Brix tests to gain insight into the nutritional value of their product. Brix testing relies on a simple device called a refractometer that is used to estimate the concentration of solutes in xylem and phloem, the circulatory systems of plants. The reading produced from a refractometer is assigned a value on the Brix scale—pure water has a Brix value of zero, while water with dissolved sugars, vitamins, minerals, and other solids would have a higher Brix value. Although a relationship between Brix levels and the nutritional value of a fruit or vegetable requires further research to be definitively established, some inquisitive growers use Brix testing to explore possible connections between their production methods and the nutritional content of their produce. 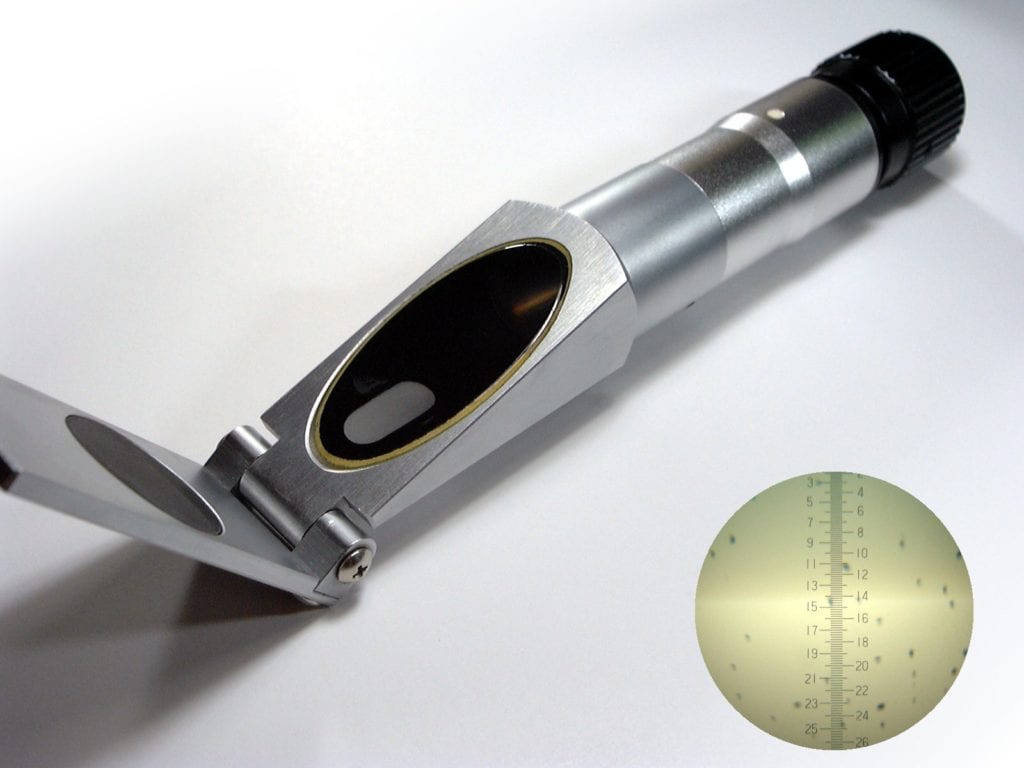 A handheld refractometer used to measure Brix levels. The image includes a view through the eyepiece of the instrument. (Wikimedia Commons)

Drawing on sources including The Intelligent Gardener, by Steve Solomon, Jennifer and Greg set a goal to achieve average Brix levels of 12 percent in their crops. However, when they started their CSA in 2009, they were typically observing Brix levels of only three percent. By adapting recommendations in The Intelligent Gardener, they steadily worked to improve these levels by strategically applying minerals to their soil.

Their typical amendment routine includes an eight-way mixture of Agro-Lig Humate, AZOMITE, Dolomite pelletized lime, guano, gypsum, kelp, ReVita Pro, and soft rock phosphate. They apply this mixture precisely to the soil in plant rows, rather than broadcasting over an entire bed or field. Additionally, they apply supplemental nitrogen as needed through fertigated or foliar-fed kelp and fish emulsion. Unlike most of our vegetable farm members, Jennifer and Greg have never applied compost or manures to their fields in bulk, and, as a result, they are also fairly unique compared to many of our members in that their soil tests do not show excessive levels of phosphorus. (For more information about excessive phosphorus levels, read our soil health case study “Too Much of a Good Thing: Compost Brings Phosphorus Challenges to Red Earth Farm.”)

The mineral applications appear to be achieving Jennifer and Greg’s intended results. By 2017, Brix levels at Blackberry Meadows have doubled from three percent to six percent. Additionally, Greg suspects the mineral additions are helping stimulate the farm’s soil microbial community, leading to more efficient nutrient cycling within the soil. Greg’s hypothesis is supported by Blackberry Meadows’ soil tests conducted by the Cornell Soil Health Lab: The farm’s soil respiration levels, which measure the metabolic activity of soil microbes, were rated as “optimal” (see “Methods” below) in all three of the fields we’re monitoring as part of our Soil Health Benchmark Study. While soil microbial communities are shaped by a complex set of factors—including crop rotations, tillage, and soil type—mineral applications could be a significant part of the microbial picture at Blackberry Meadows.

Jennifer and Greg have continued to explore how to further invigorate their microbe friends—and thereby the nutritional quality of their produce—through research supported by a USDA Sustainable Agricultural Research and Education (SARE) grant. Since mycorrhizal fungi are particularly important for helping plants access soil nutrients, it’s feasible that denser fungi populations could contribute to greater nutritional value in crops. In 2017, Jennifer and Greg conducted an experiment to explore how reducing soil disturbance using mulch might improve mycorrhizal populations, and thereby boost Brix levels, in kale plants. They compared kale planted under three conditions: a wood chip mulch, black plastic, and bare ground.

They found that kale mulched with wood chips had substantially higher Brix readings, and wonder if this may be because the wood chips create a habitat with more even temperature and moisture levels, allowing the fungi to thrive. Greg emphasizes that these results are preliminary, and he hopes a university research team can pick up the baton to directly evaluate how mycorrhizae respond to mulch treatments. (You can read more about Greg and Jennifer’s research here.)

Although thriving mycorrhizal communities are an important component of soil health, Blackberry Meadows’ soil test results also point to a delicate balance between building soil and decomposition. As mentioned earlier, the farm’s high respiration scores show that decomposer microbes are abundant in the soil. But while the Cornell Soil Health Lab rated the total organic matter levels in Blackberry Meadows’ soil samples as “excellent” to “optimal,” the farm’s active carbon levels were rated “low” to “average.” These lower active carbon levels suggest that microbes have a limited supply of readily available food and energy through fresh, decomposable matter. Without an ongoing supply of organic matter inputs, microbes’ access to decomposable materials may diminish over time, which can cause total organic matter levels to eventually drop.

To maintain both their microbial activity levels and their organic matter levels, Jennifer and Greg could integrate more cover crops into their crop rotation to provide a continuous source of active carbon and fresh organic matter inputs. Currently, Blackberry Meadows’ fields are in living cover for only 133 days of the year, while the median for vegetable farms participating in our Soil Health Benchmark study is 217 days. Like many diversified vegetable farmers, Jennifer and Greg face a constant trade off between maximizing their growing window for late fall cash crops and establishing a solid winter cover crop. Often, they choose to maintain cash flow by harvesting kale or tomatoes well past the point where a cover crop would have time to establish and produce useful biomass.

Jennifer finds that designing an effective cover cropping strategy is one of her biggest challenges. Some techniques our other vegetable farmer members have used to integrate more cover crops into their crop rotation include full-season cover crop fallows (i.e., taking a field out of cash crop production); seeding pathways between beds with clover cover crops; and “hard stop” rotations, where farmers make plans at the start of the season to terminate a cash crop after a specified date and get a cover established (knowing full well there may still be some marketable produce in the field). We explore full-season cover cropping in another soil health case study, “Stuck in a Rut: Stagnant Organic Matter Levels at Bending Bridge Farm.”

By creatively using fertilizers and refraining from bulk applications of compost, Jennifer and Greg seem to have been able to boost Brix readings in their produce, sustain soil microbial communities, and avoid the common issue of excessive phosphorus. Yet, while their soil health is currently strong, their low active carbon readings and current cover cropping practices could point toward problems in the long term. As our Soil Health Benchmark Study progresses, we will continue to explore innovative cover cropping strategies that enable farmers to build soil health while still meeting their sales goals. We’re also looking forward to further investigating the relationship between soil health and nutrition as our research continues.

Farmers participating in our Soil Health Benchmark Study choose three fields that span their typical crop rotation. We collect soil samples from these fields in October, which we then submit to the Cornell Soil Health Lab. The lab assesses a set of 12 indicators covering physical, chemical, and biological aspects of soil health, such as available water capacity, aggregate stability, soil respiration, and extractable phosphorus. Cornell rates the soil samples on a 100-point scale (see image below) relative to thousands of other samples from similar soil types—in other words, a sandy loam will be rated according to a different set of standards than a soil high in clay.

We also collect farmers’ detailed management records for each field, and generate our own indicators for days of living cover, tillage intensity, and organic matter and fertilizer inputs.

Thanks so much to Blackberry Meadows Farm for openly and generously sharing their soil health data with farmers everywhere in the name of growing the soil health movement. Also thanks to Bob Shindlebeck and Aaron Ristow at the Cornell Soil Health Lab for their help facilitating our soil health field days.